The New World Bootswain Ambrose fight forms part of the One Threat at a Time quest. However, it is not difficult to find the renegade pirate.

Although the quest marker will direct you to the correct area, X does not mark it — at least not entirely. It will take some exploration.

you’ll need to kill some enemies. This was true in beta, and it is still true today that New World’s final version has been released.

Where is Boatswain Ambrose?

You will find Ambrose nowhere when you follow the quest marker to First Light docks. Continue to the ground by walking down the docks.

New World is generous in terms of how much health you have after falling from high heights. If you don’t feel like climbing the stairs, you can jump down.

Turn right and face the ship in the harbor. You’ll find a large opening that leads into a cave by going under the stonework bridges and docks.

Before you reach Ambrose, there are several enemies in the cave passage that you will need to defeat. They’ll follow you into battle and make it more difficult than you want. 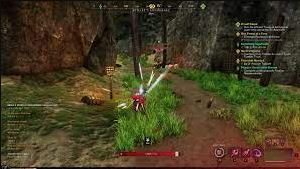 Sometimes, the Boatswain Ambrose fight has the same problem as the Alastor fight. There might be a pirate waiting for your arrival. You can either reset the quest or wait until the boss respawns.

Boatswain Ambrose, a level 18 boss is not a problem. It depends on how diligent you have been. Ambrose is slower than some bosses but his hits do heavy damage once they land.

Staves and muskets are solid options, but you have limited space in the cave. Ambrose will quickly fall if he rushes in with quick attacks and then backs away as he swings his weapon.

You can find a great way to get a team of people to fight the battle by mining New World’s unique Fae Iron for quality gear. To make ammo, you can either gather Saltpeter or relax and weave cloth out of hemp.